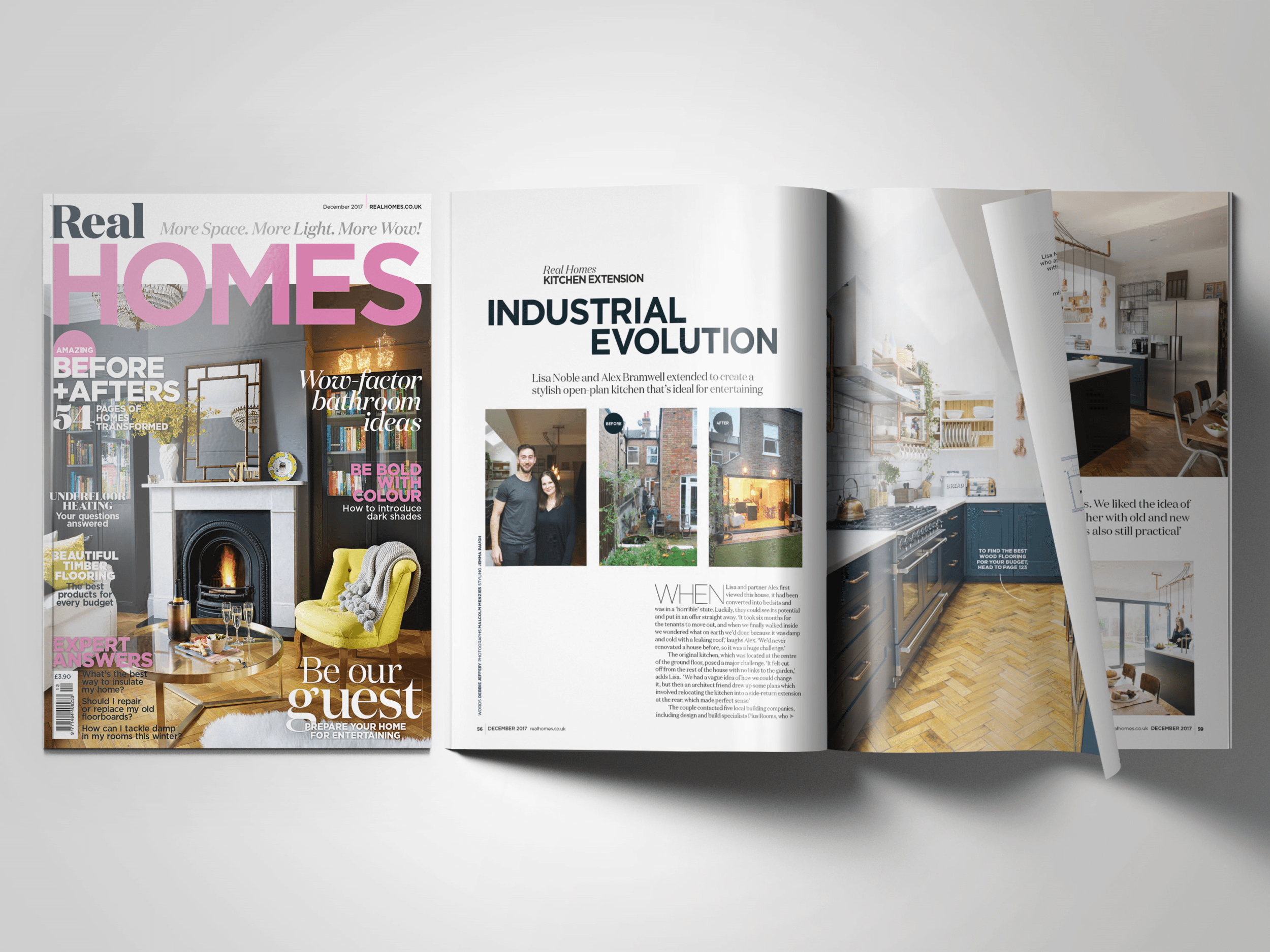 When Lisa and partner Alex first viewed this house, it had been converted into bedsits and was in a ‘horrible’ state.? Luckily, they could see its potential and put in an offer straight away.? ‘It took six months for the tenants to move out, and when we finally walked inside we wondered what on earth we’d done because it was damp and cold with a leaking roof’, laughs Alex.? ‘We’d never renovated a house before, so it was a huge challenge’.

The original kitchen, which was located at the centre of the ground floor, posed a major challenge.? ‘It felt cut off from the rest of the house with no links to the garden’, adds Lisa.? ‘We had a vague idea of how we could change it, but then an architect friend drew up some plans which involved relocating the kitchen into a side-return extension at the rear, which made perfect sense’.

The couple contacted five local building companies, including design and build specialists Plus Rooms, who had been recommended to them.? Impressed by the company’s quote, and the fact that they could undertake virtually every aspect of the project for them, Lisa and Alex handed over their plans.? These were tweaked and redrawn, and the neighbours served with Party Wall notices, as the new extension would be built right up to the plot boundary.? No planning consent was required as the size of the extension fell within permitted development rights.? ‘The garden isn’t that big, so we didn’t want to extend out to the rear, and we could see that filling in the side return would create enough space for a large kitchen-diner’, add Lisa.

Before work began, a mini kitchen was installed in the couple’s lounge, with a sink, washing machine and fridge, so they could carry on living in the house during the build. ‘Plus Rooms thought of everything, including temporary cat flaps’, says Lisa.? The first stage of the project involved excavating new foundations for the brick and block extension.? Structural steelwork was then installed and internal walls demolished, with the bricks retained to be reused for some of the new external cavity walls. ‘I remember coming home from work one day to find the entire back of the house down, where our bi-fold doors were going to be fitted’, she adds.? ‘It was really tough living on a building site over the winter, so we visited family and friends as much as we could at weekends’.

A wall between the new dining area and one of the neighbouring houses was painstakingly stripped back and exposed for an industrial feel.? The builders removed most of the old plaster then Lisa and Alex spent hours chiselling and hand-sanding the bricks themselves which have since been sealed.? Parquet flooring, reclaimed from a convent, was laid by a local specialist as the original floorboards and some of the supporting joists were rotten and could not be saved.? ‘We received beautiful samples of the flooring to choose from, and then round a ton of filthy blocks arrived, covered in tar, which took five days for us to clean and lay’, laughs Lisa.

The simple wooden kitchen came primed ready for painting, and after trying a number of tester posts, Alex and Lisa choose Little Greene’s Basalt – an inkly blue shade.? Kitchen company Harvey Jones installed and painted the cabinets, and another company then cut and fitted the hard-wearing quartz worktops.? After that, the Plus Rooms finishing team came back and completed all the decorating and tiling to finish the space.

Alex and Lisa took charge of designing the interior, searching for ideas online and compiling Pinterest boards.? they found a local craftsman specialising in using reclaimed materials and copper pipe, who made the open shelving, handles for the kitchen doors and part of the stunning bespoke light above the long island unit.? ‘ Our biggest disaster turned out to be the very expensive kitchen taps, which were customer made from vintage parts by an Ebay seller’, admits Alex.? ‘Although beautiful to look at, they are completely impractical because they’re so tall that they leak and splash water everywhere’.

Overall, though, the project has been a resounding success, and the couple now enjoy entertaining family and friends in their stylish new kitchen.? ‘Our first meal was a barbeque in June, with the glass doors pushed right back so that people could walk in and out to the deck,’ adds Lisa.? ‘It works equally well for entertaining in winter, especially as we now have plenty of room to sear large numbers.? It’s definitely been work all the upheaval.’