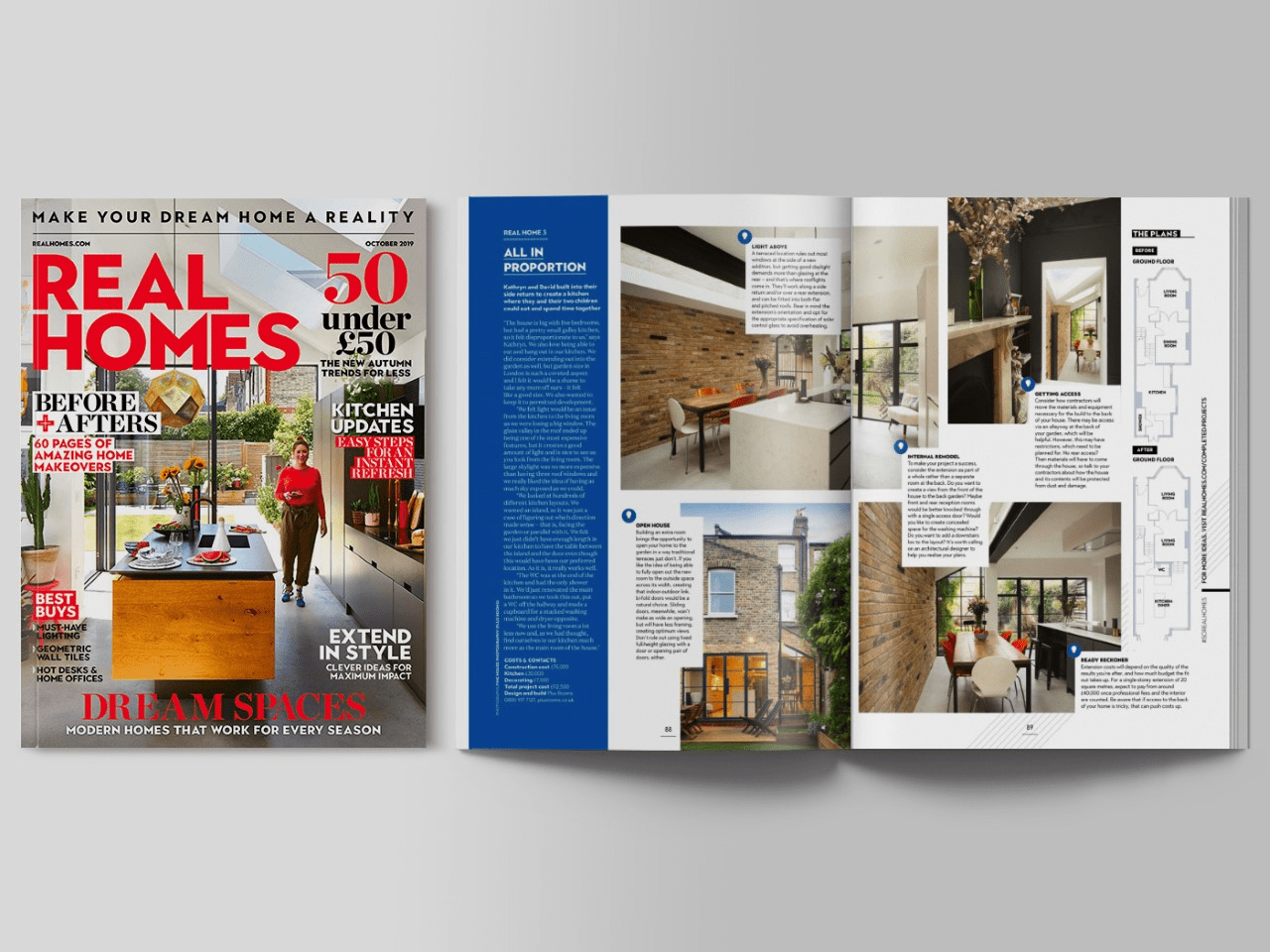 A GUIDE TO EXTENDING A TERRACED HOUSE

A layout that feels old-fashioned and a lack of space that is cooling your ardour for your home? Get excited by these ideas for transforming a terrace.

“The house is big with five bedrooms, but had a pretty small galley kitchen, so it felt disproportionate to us’, says Kathryn.? We also love being able to eat and hang out in our kitchen.? We did consider extending out into the garden as well, but garden size in London is such a coveted aspect and I felt it wold be a shame to take any more off ours – it felt like a good size.? We also wanted to keep it to permitted development.

“We felt light would be an issue from the kitchen to living room as we were losing a big windows.? The glass valley in the roof ended up being one of the most expensive features, but it creates a good amount of light and is nice to see as you look from the living room.? The large skylight was no more expensive than having three roof windows and we really liked the idea of having as much sky exposed as we could.

Light Above – a terraced location rules out most windows at the side of a new addition, but getting good daylight demands more than glazing at the rear – and that’s where rooflights come in.? They’ll work along a side return and/or over a rear extension, and can be fitted into both flat and pitched roofs.? Bear in mind the extension’s orientation and opt for the appropriate specification of solar control glass to avoid overheating.

“We looked at hundreds of different kitchen layouts.? We wanted an island, so it was just a case of figuring out which direction made sense – that is, facing the garden of parallel with it.? We felt we just didn’t have enough length in our kitchen to have the able between the island and the door even though this would have been our preferred location.? As it is, it really works well. 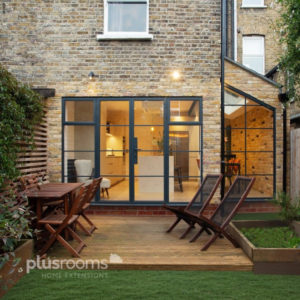 Open House – Building an extra room brings the opportunity to open your home to the garden in a way traditional terraces just don’t.? If you like the idea of being able to fully open out the new room to the outside space across its width, creating that indoor-outdoor link, bi-fold doors would be a natural choice.? Sliding doors, meanwhile, won’t make as wide an opening but will have less framing, creating optimum views.? Don’t rule out fixed full-height glazing with a door or opening pair of doors, either.

“The WC was at the end of the kitchen and had the only shower in it.? We’d just renovated the main bathroom so we took this out, put a WC off the hallways and made a cupboard for a stacked washing machine and dryer opposite.

“We use the living room a lot less now and, as we had thought, find ourselves in our kitchen much more as the main room of the house.” 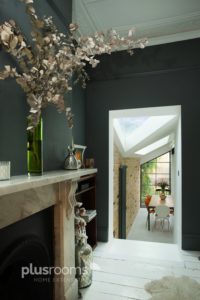 Getting Access – Consider how contractors will move the materials and equipment necessary for the build to the back of your house.? There may be access via an alleyway at the back of your garden, which will be helpful.? However, this may have restrictions which need to be planned for.? No rear access?? Then materials will have to come through the house, so talk to your contractors about how the house and its contents will be protected from dust and damage.? 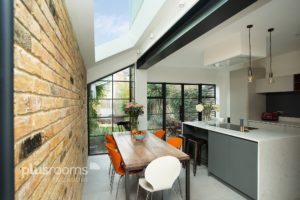 Internal Remodel – To make your project a success, consider the extension as part of a whole rather than a separate room at the back. Do you want to create a view from the front of the house to the back garden?? Maybe front and rear reception rooms would be better knocked through with a single access door?? Would you like to create concealed space for the washing machine?? Do you want to add a downstairs loo to the layout?? It;s worth calling on an architectural design to help you realise your plans.?

Ready Reckoner – Extension costs will depend on the quality of the results you’re after, and how much budget the fit out takes up. For a single-storey extension of 20 square metres, expect to pay from around ?40,000 once professional fees and the interior are counted.? Be aware that if access to the back of your home is tricky, that can push costs up.?