A modern addition to Sarah and David Richardson’s home has created an open-plan kitchen and living space where all the family can gather. 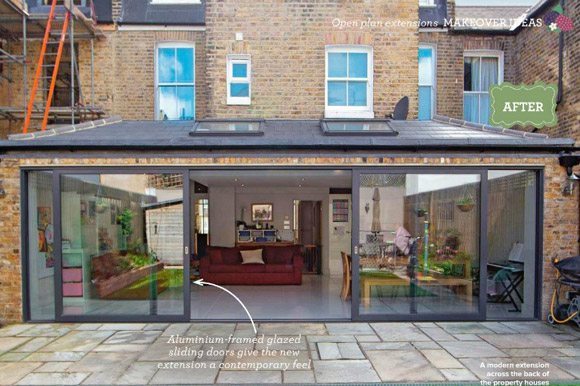 Sarah and David Richardson were looking to buy a home in Battersea, southwest London, when they spotted a double-fronted, four-bedroom Victorian house on the same road they were renting on. ‘There are very few double-fronted houses in the area and, with four daughters to accommodate, we needed all the space we could get.’ says Sarah. 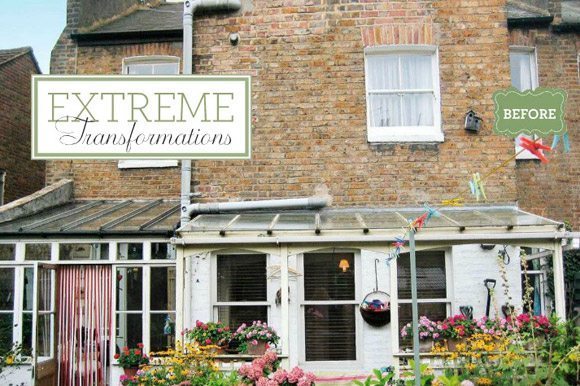 The couples arranged a viewing and were pleased to find it had two good-sized reception rooms to one side of the hallway and a study and kitchen on the other. A tumbledown conservatory and a glass lean-to at the rear of the house were not quite as appealing, but Sarah and David could see the potential to replace them with a new extension at the back of the house.

The family had previously enjoyed living in an open plan home in the United States, and were keen to create something similar in their new home. ‘It made sense to include a play area in the extension.’ Says Sarah. ‘We wanted to make radical changes before we moved in-living in a building site with young children just wasn’t an option-but staying in our rented property was expensive and meant we needed the work completed as quickly as possible.’

Sarah and David asked an architect to design a single-storey, glass fronted extension for an open-plan kitchen-diner and living area cross the width of the back of the house, plus a loft conversion to provide two more bedrooms.

As time was critical for the family, the planning application was submitted as soon as contracts were exchanged on the house. The original plans for the rear extension included a flat roof, but this was assesses to be too intrusive for the couple’s neighbours, so their architect amended the design to incorporate a sloping roof. ‘In hindsight, we prefer the design we have, as the sloped slate roof matches the rest of the house.’ Says Sarah, who did a great deal of research and went to look at other extensions in the area to gather ideas.

A neighbor recommended family run design-and-build company Plus Rooms (plusrooms.com) which Sarah employed to build the extension and carry out the left conversion. ‘We spoke to a couple of other builders, but we were very impressed by Plus Rooms.’ Says Sarah. ‘They did everything, including producing a budget and schedule, cleaning and repointing the external brickwork, rewriting, plumbing and decorating the whole house and creating new bathrooms. We also asked them to put in a downstairs loo, which is essential when you have young children.’

The loft conversion was completed before building work on the extension began in February 2011. The existing lean-to and conservatory were demolished and new foundations were excavated for the extension. A great deal of structural steelwork was fitted and brick and blockwork walls were built to tie in with the original house.

Two large panels of glass at the tops of the side walls of the extension, plus two skylights and glazed external doors, flood the space with natural light. The aluminium-framed sliding glass doors were one of the more expensive elements of the project but ensure the new open-plan room links directly to the back garden.

How Sarah and David created an open-plan feel

The Richardson’s single-storey extension was designed to give their family an open-plan kitchen-diner and living space. As supporting walls were knocked through, their builders carefully concealed the structural supports so as not to take away from the room’s contemporary, open feel.

Supporting beams are hidden inside the ceiling to give the room an open feel.

Sarah took charge of the building project, while David continued to work full time. ‘I tried to think of the bigger picture when budgeting and spent more money on things you can’t easily change, such as glass doors and underfloor heating.’ She says. ‘Our only regret was that the budget dictated we had fixed, rather than opening skylights.’

Underfloor heating-a great idea for a family with young children who spend a lot of time playing on the floor-was fitted beneath low-maintenance polished ceramic floor tiles that reflect the light. ‘A high point of the project was when James Bernard from Plus Rooms texted me photos of the floor tiles going down,’ says Sarah. ‘Suddenly the room began to take shape. The builders worked so quickly that it was often difficult to keep up with them, so planning ahead for things like the layout of the electrics and music speakers was important.’

‘The extension took three months to complete. Sarah chose an off-white shade for the walls and a white high-gloss kitchen from Magnet. The Kitchen is situated in a part of the room that doesn’t have any windows, but there is a panel of glass set above the sink and breakfast bar,’ she says.

The huge room is divided into a kitchen-diner area on one side and a living zone on the other. ‘Some people might have chosen a larger kitchen, but we wanted to include a breakfast bar, dining table and a living area too,’ says Sarah. ‘Having space for the children to play means the room is used all day long. It works really well, and as the space connects directly to the garden, it’s far more practical than a standard conservatory.’

‘Having space for the children to play means the room is used all day’.